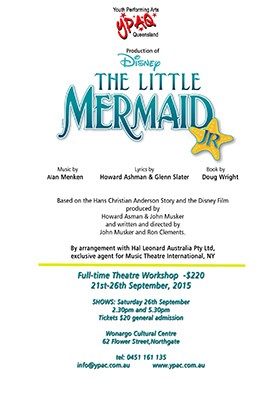 Brisbane-based Youth Performing Arts Queensland (YPAQ) offers a welcoming, safe and creative space for youths to come together and be involved in the performing arts. It offers opportunities for young people to engage with and be mentored by industry professionals. Each year, YPAQ directs four major musical productions, along with an array of public performances at some of Queensland’s most prestigious events.

In just the last five years, more than 280 young and talented performers have been able to meet and train under the tutelage of some of Australia’s finest performers, choreographers, casting directors, talent agents, directors, actors and cabaret singers. A not-for-profit organisation, YPAQ aims to raise the profile of youth theatre and emerging artists.

By enrolling your child in YPAQ for school holiday activities, you will enjoy that he or she is part of an encouraging and supportive community that is inclusive and accessible.

Based on the Hans Christian Anderson Story and the Disney Film

produced by Howard Asman & John Musker
and written and directed by John Musker and Ron Clements.

Enrol your little performer in YPAQ and watch as they develop newfound confidence while having fun and meeting new friends. To find out more, simply fill out the contact form below.